This is the Mac Daddy cut of meat, so you want to make sure you cook it properly.  Since it’s summer, I want to grill this tenderloin.  But we call it “grill-roasting” so it is tender and tasty!

Grill-roasting involves building a two-zone indirect fire—that’s a fire in which most of the coals are piled up on one side of the grill to create a hot zone, while the rest create a cooler zone on the other side.

At least 45 minutes prior to grilling, salt the tenderloin and allow it to rest at room temperature. Then coat the meat with the melted butter, so it develops a crust when you sear it.
Sear the tenderloin for about 2 minutes on each side.

After searing, transfer the roast to the cooler side of the grill, cover it, and allow the meat to cook over indirect heat until it hits the desired final temperature—120°F for rare, 130°F for medium-rare, and so on. This will take anywhere from 15-25 minutes, with one turn of the meat during that time to maintain the evenness we’re working towards. Don’t cook the tenderloin anywhere above medium. Without any real fat on this cut to lubricate the meat, it becomes quite dry and almost chalky tasting.

Once it hits your desired doneness, transfer the tenderloin to a cutting board and let rest for 10 to 15 minutes. During this time, the core temperature will continue to rise by a few degrees, while the rest of the meat will slowly relax, allowing it to retain more juices during carving. 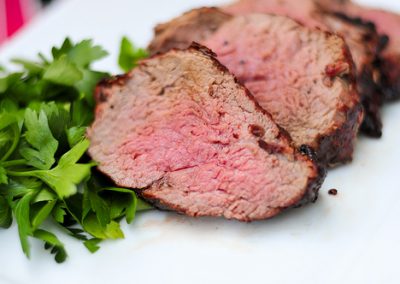