Season the beef generously with salt and pepper, to taste. Heat a large, heavy skillet over medium-high heat. Add the oil and heat just until beginning to smoke. Add the meat and cook, turning once, until browned on both sides, about 10 minutes total. Transfer the meat to the slow cooker; leave the skillet on the heat.

Add garlic, onion, chili powder, coriander, and cumin to drippings in the skillet and stir until fragrant, about one minute. Add vinegar and boil until it’s almost gone, scraping the bottom of the pan with a wooden spoon. Stir in water and pour the mixture over the brisket. Crush the tomatoes into the slow cooker; add the tomato juices, chipotles, bay leaves, and molasses. Cover the cooker, set it on LOW, and cook the brisket until it pulls apart easily with a fork, about 8 to 10 hours.

To serve, you’ve got two options:
1.Leave the meat in the slow cooker and use two forks to pull it apart and stir it evenly into the sauce; season with salt and pepper, to taste. Remove and discard bay leaves. This is obviously the simplest route.

2.Strain the sauce (to remove the vegetables and bay leaves), chill it so the fat is easy to remove, then reheat and reseason it well, simmering it down (to about 2/3 the volume) to thicken it a bit. Pour it back over the brisket and pull it, and then, reheat the whole pan on low. (You could also thicken the sauce without skimming the excess fat – there’s very little).

And HOW about this dessert? TO DIE FOR… 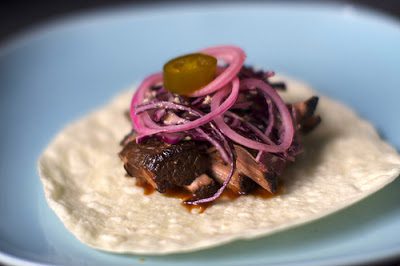