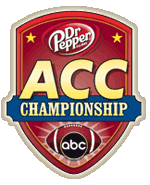 KICKOFF: Saturday, December 1st, 8PM, Bank of America Stadium, ESPN
PARTY: 6PM
Somehow, someway, Georgia Tech has made it to the ACC Championship Game in Charlotte, NC.
Florida State (10-2, 7-1 ACC) vs. Georgia Tech (6-6, 5-3)
Georgia Tech: The Yellow Jackets finished in a three-way tie for the Coastal Division championship with North Carolina and Miami. The Yellow Jackets would have lost tiebreakers with the Tar Heels and Hurricanes, but come to Charlotte because North Carolina is on NCAA probation and Miami turned down postseason play with a self-imposed penalty because of a pending NCAA investigation.
Florida State: The Seminoles tied Clemson for the Atlantic Division but win the title because of their 49-37 win against the Tigers in September.
Read more here: http://www.charlotteobserver.com/2012/11/25/3688377/acc-football-championship-florida.html#storylink=cpy

OK, so it’s not exactly THE game of the century, but we’re loyal fans and will cheer on the Jackets as best we can!

We are unable to attend the game, as we have out of town guests visiting, so we’re going to do the next best thing — throw an ACC Championship Game Party!  Oh, and we’re huge SEC fans, so we’ll be watching the Alabama vs Georgia game as well!

Mix the artichoke hearts, green onions, garlic, cream cheese, mayo, sour cream, mozzarella and parmesan, reserving some of the cheese. Hollow 1/2 inch out of the center of both halves of the bread.Spread the mixture into the hole in the bread slices and top with the reserved cheese. Bake in a preheated 350F oven covered in foil for 20 minutes. Remove the foil and continue to bake until the cheese is melted and golden brown.

This dip should have my picture next to it, because it has everything I love in it – olives, cream cheese, garlic, jalapenos, and yes, vodka!  Serve with crackers, chips or crudites.
1 8oz pkg cream cheese, softened
1 8oz jar of chopped green olives, drained but reserve juice
1/8 tsp black pepper
2 minced garlic cloves
4 green onions, chopped both tops and green
1/4 tsp garlic salt
~ 1/4 cup mild pickled jalapeno peppers
1 oz vodka

Combine all ingredients and blend until well mixed.

Add some olive juice if desired for that Dirty Martini flavor!

Chill for an hour.

PIMENTO CHEESE POTATO GRATIN(adapted from Saveur)
3 teaspoons salt, plus more to taste
1 1⁄2 pounds Yukon Gold potatoes, peeled and sliced into 1⁄4-inch thick rounds
3⁄4 cup heavy cream
3 shallots, finely diced (scant 1⁄2 cup)
1⁄4 teaspoon crushed dried red chile flakes
1⁄2 teaspoon freshly ground black pepper
One 9-ounce jar roasted red peppers or piquillo peppers, with their liquid, chopped
8 ounces extra-sharp cheddar cheese, coarsely grated (about 2 cups)
Heat the oven to 375°F, with racks positioned in the middle and the top third of the oven. In a 3- to 4-quart stockpot, bring 2 quarts water and 2 teaspoons of the salt to a boil. Add the potatoes and cook for 10 minutes. Then drain, and set them aside.
Combine the cream, shallots, chile flakes, remaining 1 teaspoon salt, the black pepper, and 2 tablespoons of the liquid from the jar of roasted peppers in a small saucepan. Bring to a simmer and cook until the chile flakes have begun to stain the cream, about 2 minutes.
Add half of the cheese and stir until it melts, about 1 minute. Remove the pan from the heat.
Layer roughly a third of the potatoes in a 6-cup baking dish, overlapping them slightly so that they fit in an even layer.
Scatter half of the roasted peppers on top of the potatoes, and repeat layering potatoes and peppers until all the peppers and potatoes have been used. Pour the cream mixture over the potatoes and peppers, and agitate the dish to distribute the liquid throughout.
Cover with aluminum foil and bake on the middle rack for 15 minutes.
Uncover the dish, sprinkle the remaining cheese over the top, and place the dish on the top oven rack. Bake for 8 minutes, or until the cheese is bubbly and gently browned on top. Serve immediately.

This dish is so simple to make, yet it’s absolutely delicious.  My sister-in-law fixed it for us recently and then generously gave me the Junior League cookbook that the recipe appeared in.  Thank you Sarah!
1 2lb bag of buttercream potatoes, UNpeeled
1/4 cup olive oil
1/4 cup grated Parmesan Cheese
1 tsp salt
1 tsp paprika
1/2 tsp freshly ground pepper 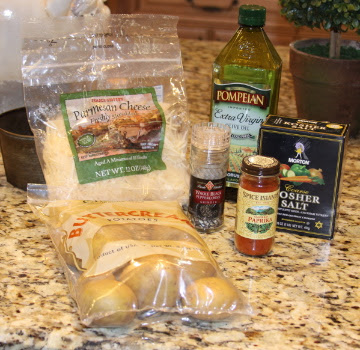 Preheat oven to 375 degrees F.  Scrub potatoes and cut into wedges.  Place wedges, skin side down, in a single layer on a baking dish.  Mix remaining ingredients in a small bowl and brush evenly over potatoes. Bake 1 hour or until potatoes are tender.  Serves about 6.
FALL CHOPPED SALAD

In a blender or food processor, combine sugar, vinegar, salt, mustard and onion and process for 20 seconds.

With blender or food processor on high, gradually add oil in a slow, steady stream.
Stir in poppy seeds.

Bake, rotating sheets halfway through, until cookies are shiny and crackly yet soft in centers, 12 to 15 minutes. Cool on baking sheets 10 minutes; transfer to a wire rack to cool completely.

***Don’t worry if the batter seems thin. It should look more like a brownie batter than a cookie dough.
APPLE CIDER MARTINI (2 versions)
I’m going to make a batch of these for the group.  I found 2 recipes, and I’m going to sample each to see which one I prefer before the party.

Place vodka and cider in martini shaker with several ice cubes and shake well.
Strain ice out and pour into martini glasses with cinnamon-sugar rim.

COOL GADGET ALERT:
Found these online, and they are perfect for tailgating.  You simply stick the black etch-able stickers on your Solo drink cup and etch your name with your fingernail. No pen or chalk needed. Love these!