So, unfortunately none of MY favorite teams are playing for this year’s National Championship.  There aren’t even any SEC or ACC teams in the game.  But we’ll have some friends over to watch the game anyway and have a party with great food to celebrate the end of the season. 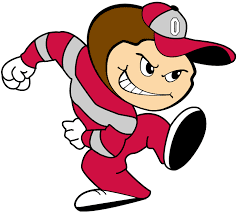 Serve these veggies in small glasses (like shot glasses).  Much easier to eat, and it looks great on the party table!  Always nice to include something healthy in the tailgate food mix.

Combine all ingredients in a medium bowl. Season to taste with salt and pepper.

Refrigerate until well chilled to allow the flavors to blend. Put 2 TSBP of dip in each shot glass and top with veggies of your choice.

(Adapted from Food and Wine)

Using a slotted spoon, transfer the bacon to a bowl.

Add the celery, onion, jalapeño, garlic and thyme to the saucepan and cook over moderate heat, stirring, until softened, 8 minutes.

Add half of the beer and cook until reduced by half, 5 minutes.

Add 2 1/4 cups of chicken broth and bring to a simmer.

Whisk this roux into the soup until incorporated and bring to a simmer.

Cook until thickened, about 8 minutes. Add the heavy cream, cheddar cheeses and the remaining beer and simmer, stirring occasionally, until thick and creamy, about 5 minutes.

Now, you can either stir in the bacon and season with salt and pepper OR go ahead and season the soup with s&p but serve the bacon on the side for your guests to add.  That way the bacon doesn’t get soggy.  Add a few tablespoons of broth if the soup is too thick. Serve the soup with garlic toasts.

Using a wooden spoon or clean hands, stir until well combined. Roll the mixture into 1 1/4-to-1 1/2-inch meatballs, forming about 24 meatballs.

Place meatballs onto prepared baking sheet and bake for about 8 minutes, or until lightly browned.
Place meatballs into a slow cooker. Add buffalo sauce and gently toss to combine.

Cover and cook on low heat for 2 hours. Serve immediately, drizzled with blue cheese or ranch dressing, if desired.

Melt butter in a large saucepan or skillet over medium heat. Add onion and cook until soft, about 5 minutes.

Stir until well blended and heated through. Pour mixture into a 1 1/2-quart casserole dish and top with remaining 1/4 cup Monterey Jack and 1/4 cup Parmesan cheese.

Bake in a 350 degree F oven until cheese starts to brown, about 10 minutes. Serve with pita bread or tortilla chips and garnish with tomatoes.

I’ve had this recipe for so long I have no idea who to credit!  It’s really great, and it’s very easy to throw together. I found a similar one from Paula Dean.
1 c. (2 sticks) butter, softened
1 c. crunchy peanut butter
3 c. powdered sugar, sifter
1 1/2 c. graham cracker crumbs
1 2/3 c. chocolate chips, semi-sweet

Line a 13×9 inch pan with aluminum foil. In a food processor, combine butter, peanut butter, sugar, and crumbs (I made my own with Graham Crackers) until a ball forms.

Press mixture into the pan using a spatula.

Over a double-boiler or in the microwave (with 1-2 TBSP of water), melt the chocolate chips. Stir, then spread over peanut butter mixture.

MANZARITA
(Adapted from Bourbon and Boots)
I was originally thinking I wanted a hot drink to go with this meal since it’s the middle of winter, but I stumbled upon this recipe and I think it will warm us up adequately! 😉

Muddle the lemon wedges and cinnamon in a cocktail shaker.

Strain into a glass over ice and garnish with a cinnamon stick.

Till the next adventure….