IT’S THE MOST WONDERFUL TIME OF THE YEAR!

No it’s not the holiday season. It’s August in the South, and that can only mean one thing – – – FOOTBALL SEASON! It’s August.  The anticipation is similar every year. All of my favorite teams are undefeated, and there is hope in the air of bowl games, SEC and ACC titles and potential National Championships!

To go along with the excitement and hope of what lies ahead, I’m inspired to create new tantalizing menus:

Let’s start with these appetizers:

Beat together first 5 ingredients at low speed with a electric stand mixer until blended. Gradually add beer, beating until blended after each addition. Beat at medium-high speed 1 minute or until blended and creamy. Season with salt and pepper to taste. Cover and chill 2 hours. Store in an airtight container in refrigerator up to 2 weeks. This spread can be frozen up to 1 month; thaw overnight in refrigerator.
Grilled Beer-Cheese Sandwich: Spread 1 tsp. softened butter evenly on 1 side of 2 bread slices. Place bread slices, buttered sides down, on wax paper. Spread 1/4 cup Beer-Cheese Spread onto 1 side of 1 bread slice. Top with remaining bread slice, buttered side up. Cook sandwich in a nonstick skillet or griddle over medium heat 3 to 5 minutes on each side or until golden brown and cheese is melted. 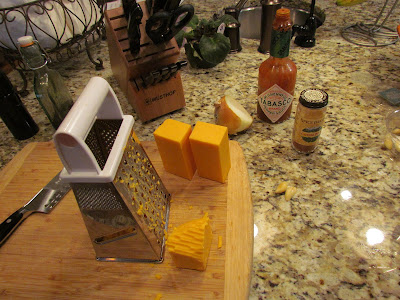 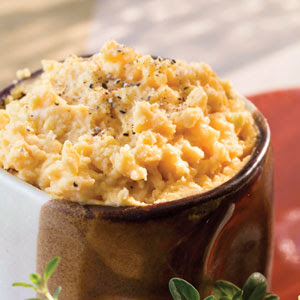 This spread is one of my all time favorites. It has all my favorite ingredients, and I could probably just eat the entire thing without stopping. But I won’t. It’s really good though.

Thoroughly rinse the olives in cool water. Place all ingredients in a food processor. Process to combine, stopping to scrape down the sides of the bowl, until the mixture becomes a coarse paste, approximately 1 to 2 minutes total. Transfer to a bowl and serve.

Have a platter of fresh vegies and crackers to go with the dips. I love it with belgian endive and radicchio sliced.

For the main course:

Platter of Chicken fingers from Chick-Fil-A and

Stir together remaining 1 teaspoon salt, garlic, and next 7 ingredients.

Pour half of mixture into a 5 1/2-quart slow cooker.

Cover and cook on HIGH 7 hours.
Shred beef in slow cooker with two forks. Serve in rolls or buns with dill pickle slices and cole slaw.

Sauté until shallot is golden brown, about 4 minutes. Add corn kernels, 1 teaspoon coarse salt, and 3/4 teaspoon pepper. Sauté until corn is tender, about 5 minutes. Remove from heat and mix in all herbs.

Season to taste with salt. Transfer corn to bowl and serve

And I seem to have more and more vegetarian (or at least non-meat eating) friends, so I’m including on each menu delicious items for them as well.

I have 3 recipes to choose from – both equally delicious, just choose your the ingredients to suit your taste. The 3rd one is the easiest. 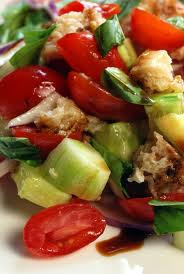 Preheat the oven to 300°F.
In a bowl, toss the bread with the olive oil and salt and pepper to taste. Spread the bread on a baking sheet and bake for 7 to 10 minutes, until slightly crisp. (The pieces should not be as crispy as croutons.) Alternatively, spread the bread cubes on a baking sheet and let them dry, uncovered, for about 24 hours.
In a large bowl, whisk together the vinegar, capers, zest, and garlic. Season to taste with salt and pepper. Whisking constantly, add the extra virgin olive oil in a stream until well incorporated.
Add the onion, tomatoes, bell peppers, cucumber, fennel, and olives and toss with the vinaigrette. Adjust the salt and pepper.
Tear the fennel fronds and add them to the bowl along with the basil and bread. Toss to coat. Set aside for 20 minutes.
Garnish with shaved cheese and serve. 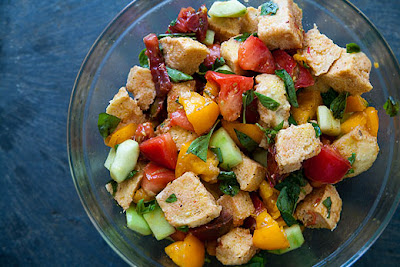 As you cut the tomatoes, remove some of the seeds and liquid. Your panzanella will be juicy enough. Leave the crusts on the bread chunks; they will stay chewier and give the panzanella more substance.
INGREDIENTS
4 cups tomatoes, cut into large chunks
4 cups day old (somewhat dry and hard) crusty bread (Italian or French loaf), cut into chunks the same size as the tomatoes*
1 cucumber, skinned and seeded, cut into large chunks
1/2 red onion, chopped
1 bunch fresh basil, torn into little pieces
1/4 to 1/2 cup good olive oil
Salt and pepper to taste
* If you don’t have hard old bread sitting around, you can take fresh crusty bread, cut it into big cubes, lay the cubes out on a baking sheet, and put in a 300°F oven for 5-10 minutes, until the outer edges have dried out a bit (not toasted, just dried). If you use fresh bread without doing this, the bread may disintegrate into mush in the salad.
METHOD
Mix everything together and let marinate, covered, at room temperature for at least 30 minutes, up to 12 hours. Do not refrigerate or you will destroy the texture of the tomatoes.
Serve at room temperature.
Yield: Serves 6-8.

Stir pesto and mayonnaise in small bowl to blend. Season with salt and pepper.
Prepare barbecue (medium-high heat). Grill rolls, cut side down, until lightly toasted. Transfer to plates. Spread grilled side of rolls with pesto mayonnaise.
Brush mushrooms on both sides with oil; sprinkle with salt and pepper. Grill, rounded side up, 4 minutes. Turn mushrooms over. Cover and grill until mushrooms are tender, about 4 minutes. Place 1 mushroom on each roll bottom. Top each with enough red pepper pieces to cover, then with arugula and cheese. Press roll tops over and serve.

And we’ll follow up with an absolutely yummy dessert: